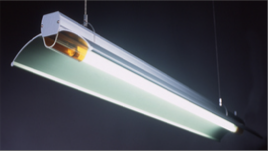 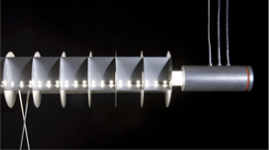 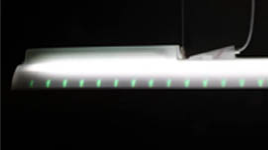 Hooded like a transparent skin that has been pulled over her parts. Myst is slender, compact, workplace- and user-friendly, easy to install and attractively priced. […]

Robin Hood Productions has specialised increasingly in the development, production and delivery of luminaires. The three products, Gandalf, Myst and HEAT, serve different segments of the lighting market and can be purchased in various types and options.

Besides the three luminaires, Gandal, Heat and Myst, other luminaires, i.a. in cooperation with architects, are frequently being developed and produced in a single production run.

The vast experience of Robin Hood Productions in the field of (production of) luminaires results in an excellent capability of quickly engineering an idea into a custom made design that can be produced. A design that meets all the needed technical qualifications, fits within budgets and which does not compromise the original idea of the client.

Click here to see our other works under EXTRA

The basis of the Gandalf luminaire consists of a specially developed aluminium extrusion profile adding to an optimal and constant distribution of light.

Gandalf is an excellent alternative for the common “white steel neon strip light”.

In case of a limited lighting budget (for offices, schools etc.) neon tubes are often the only option. Usually against the wishes of the (interior) architect, developer and occupant.

Gandalf luminaires are increasingly used for smaller and larger projects throughout the Netherlands.

A simple, elegant and effective luminaire: less is more!

THE STANDARD DESIGN OF GANDALF® LUMINAIRE IS AS FOLLOWS:

SIZES, WEIGHT AND OTHER FACTS ABOUT GANDALF® LUMINAIRE:

Gandalf luminaires can be supplied with a dimmer switch. Dimming of the light output is made possible with a switch attached to the lamp or with an electronic wall dimmer (not included). Gandalf luminaires with daylight-dependent regulation create a light output dependent on the amount of daylight. This regulation is automatically taken care of by a sensor installed on the luminaire.

HEAT is a unique addition to the range of products of Robin Hood Productions. An idea derived from the industrial heating spirals applied along the plinths of industrial offices. Hence HEAT.

HEAT is a luminaire developed for the “luxury” market, designed for executive offices, reception halls, meeting rooms etc. and based on the concept of optimum adjustable workplace lighting in a minimalist design.

The confinement characteristic of other luminaires – and often aesthetically defining – is reduced in the case of HEAT to the lamp feet alongside the luminaire.

Because the reflecting slats are placed “loose” over the neon tube and can be rotated, the light characteristic (direct) on the desk for example and (indirect) on the ceiling can be adjusted.

An optimal distribution, constancy and evenness of light on the desk and in the room, according to your requirements, are the result.

The proportions of the reflecting slats are work- and screen friendly and are in accordance with the European regulations.

SIZES, WEIGHT AND OTHER FACTS ABOUT HEAT® LUMINAIRE:

MYST IS A LUMINAIRE WITH A STORY.

This luminaire, for the lighting of Villa VPRO in Hilversum, the Netherlands, was developed in 1996 by Robin Hood Productions in collaboration with architectural office MVRDV, the building’s architect. In agreement with the transparency of Villa VPRO, the characteristic ‘hood’ of the luminaire is drawn as transparent ‘skin’ over its parts.

Since then, much interest has been created throughout the world in this “VPRO luminaire” and it has always been the wish of Robin Hood Productions and MVRDV to meet popular demand.

For some time now Robin Hood Productions has been focussing on the development and sale of luminaires. And since 2006 MYST is on offer.

Myst is the redesign of the “VPRO luminaire”, high frequent and provided with a T5 neon tube with a 16 mm diameter. Myst has become more slender, more compact, more workplace- and user-friendly, and easier to install. Needless to say it has kept its characteristic form and its “light spots” and is still attractively priced.

THE STANDARD DESIGN OF MYST® LUMINAIRE IS AS FOLLOWS:

SIZES, WEIGHT AND OTHER FACTS ABOUT MYST® LUMINAIRE:

The hood of Myst is made of either milky-white acrylic material (PMMA) with a light transmission  of 68% or bright translucent PMMA.

A more decorative, potential coloured, surface mounted version of Myst is in development. Prices and options are upon request.

Based on requirements and specifications quotations can be supplied directly by telephone and/or will be sent by email as soon as possible. Orders must be placed in writing (email), with reference to the offer supplied (if known).

The procedure for orders is as follows:

1  Robin Hood Productions will confirm your order as soon as possible by email.

1a The total amount for your order and the costs for shipment/transport, if relevant, will be included.

1b Also included will be an invoice for a down payment of 50% of the total amount due.Your order will be processed as soon as the down payment has been remitted into our bank account.

2  Your order will be delivered.

2a You will receive an invoice for the remaining amount (50% of the total amount due), including  shipment/transport costs.

50% with order confirmation, 50% after delivery. Payment term is max. 4 weeks.

Delivery of luminaires from the factory upon request. Shipment and transport costs are charged nominally.

Assignments of more than Euro 8.000,– are delivered free of charge (Europe).

You can download these documents in PDF from the section “downloads” below.

In 1995 Robin Hood Productions started out as a small company specialising in product development in the field of architecture.

In 2006, the Myst luminaire and in 208 the HEAT luminaire came on the market.
The three products, Gandalf, Myst and HEAT, serve different segments of the lighting market and can be purchased in various types and options.

Besides development, production and delivery of these three luminaires, other luminaires, i.a. in cooperation with architects, are frequently being developed and produced in a single production run. 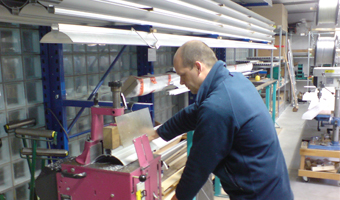 The vast experience of Robin Hood Productions in the field of (production of) luminaires results in an excellent capability of quickly engineering an idea into a design that can be produced. A design that meets all the needed technical qualifications, fits within budgets and which does not compromise the original idea of the client.
In a quick and efficient way the design can subsequently be produced by, or under the supervision of, Robin Hood Productions.